Medical emergencies in flight on the rise with aging population 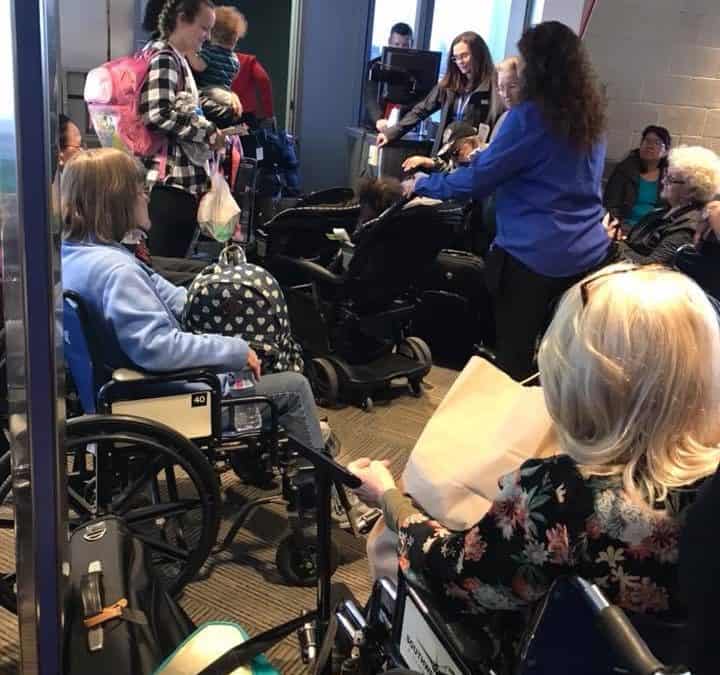 “Is there a doctor on the plane?!”

The first involved a woman in her early 70’s passing out during a short commuter flight on Southwest. The flight attendant rushed over and yelled out for a doctor, but despite the full flight, there were no doctors on board. When the plane landed, paramedics collected the passenger, who had come to, but was groggy.

The second medical emergency occurred half way between Los Angeles and Rome. A man in his late 70’s passed out and fell from his seat to the ground. This Boeing 777 had 400 passengers, two of them doctors, who stabilized the man with the help of his family and flight attendants. The plane touched down in Rome as planned, and the man was taken away in a wheelchair.

Even if the man hadn’t been stabilized in flight, it’s not likely the plane could’ve made an emergency landing. It was the middle of the Atlantic Ocean, no land nearby. Plus, most planes flying internationally require long runways, the 777 included. Even if the plane had been near a continent, it’s not clear there would’ve been a safe place to touch down.

In both incidents above, there were underlying issues. The woman on the first flight said she was tired, dehydrated and unable to sleep the night before. She was traveling for a funeral, which she ended up missing.
The man on the international flight had a daughter with him who explained that he’s a diabetic, was tired, and the 12 hour overnight and non-stop flight was too much for him.

It got me thinking… what is happening as our aging population, especially the ever-independent baby boomers, fly more into their later decades? Also, what responsibility do we have as passengers to take precautions to avoid emergencies at 30,000 feet?

My friend Scott Blanchard travels quite a bit for business. He’s a business consultant with the Ken Blanchard Companies. I remembered a picture he posted last year getting onto a flight. He wrote “the future of air travel” on his social media post, showing 19 elderly passengers being wheeled by airport staff to board a plane, plus 10 more people needing to board early due to limited mobility. This is not likely what passengers saw 30 years ago.
Broad statistics on in flight emergencies are hard to find. There is no worldwide database to which all airlines report medical emergencies. It’s generally thought that longer flights lead to more emergencies simply because of the longer time spent in a reduced oxygen, pressurized environment.

One survey of German aviation employees in 2017 tried to paint a general picture. Employees reported that the most common emergencies related to cardiovascular issues (40%), followed by neurological disorders (17.8%). Most of the time, the emergency supplies on board helped to stabilize the situation, but in 10 % of cases the flights had to be diverted. (Source – https://www.ncbi.nlm.nih.gov/pmc/articles/PMC5328610/)

An article for The Journal of the American Medical Association reports that medical emergencies occur in one of every 604 flights. The article explains that the pressurization inside the plane cabin makes it feel similar to being 5,000 to 8,000 feet high in elevation, where there is less oxygen and less humidity. Being dehydrated is more likely to lead to fainting spells in this environment. Drinking alcohol makes the likelihood of fainting spells worse. (Source https://www.ncbi.nlm.nih.gov/pubmed/30575886)

Airlines in the U.S. are required to have basic medical equipment onboard, such as a defibrillator, hemorrhage control, supplies for an assessment and simple medications. Good Samaritan laws limit the liability for health professionals who are on the plane and assist.

Airline employees only have rudimentary medical training. Passengers are incorrect to think their emergency medical needs, if serious, can be met adequately in flight, or that a plane will quickly make an emergency landing to get help on the ground.

If you are traveling with an older or medically fragile person, or if you are up there in age yourself, there are some basic precautions that you might consider:

Requirements and responses vary greatly throughout the world, so if you plan to travel internationally, keep that in mind. Bottom line is you need to use common sense, consult your doctor, consider your special needs, then sit back, relax, and enjoy your flight.