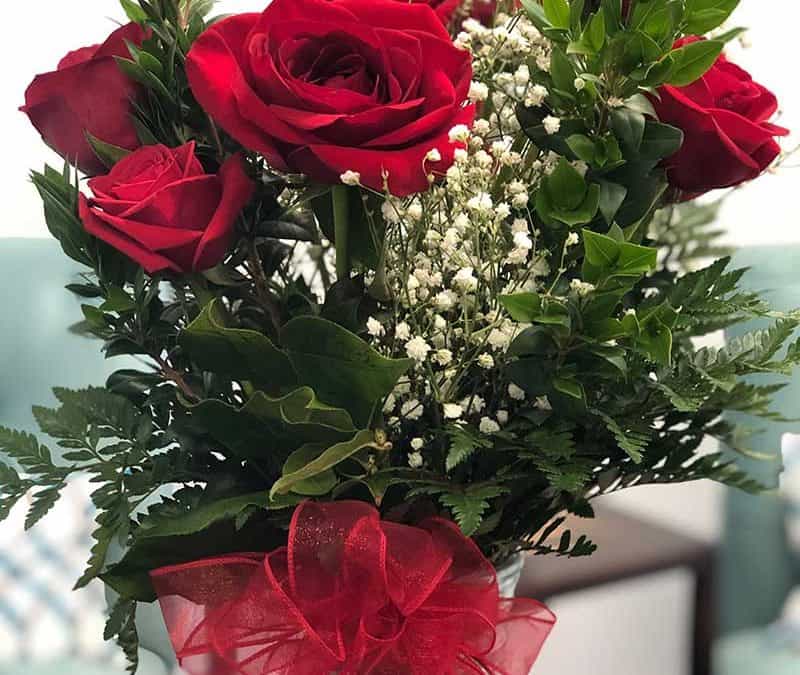 To be honest, I didn’t enjoy this past Valentine’s Day.  My husband and I argued, over something trivial of course, the day before.  So on February 14th I got nothing; no note, no flowers, no call or even text with those three little words coveted every day, but especially on 2/14.

As the day wore on, the gushy social media posts showing bright smiles and overflowing bouquets delivered to my friends made my sadness swell.  (No, I didn’t get him anything either, but that’s a story for another time.)

All arguments eventually get settled, and so a few days later, I announced to my husband that since no wife should ever be slighted on Valentine’s Day, he should send me two dozen long stemmed white roses, “to make peace,” I explained.  My husband, Brian, works best under deadlines. I gave him two weeks.

Literally on the 14th day, a big, beautiful bouquet arrived at my door, twenty four long stemmed roses, just as I requested, except… only half of those roses were white.  The other twelve stood there defiantly, thorny and the same deep blood red as the poisonous apple fed to Snow White.

The bouquet made me tepidly happy while also a little perturbed at my husband.  I felt he was needling me by including those blood red thorny little devils in what was supposed to be a calming, serene bouquet.

I texted him with the requisite thank you.  I said I understood his message; he was apologizing, sort of.

Brian was shocked.  Turns out, he had wanted to use a local florist to support neighborhood business. He had spoken to the florist on the phone to double check she had 24 white roses, explained the significance, and was assured it would be taken care of perfectly.

When he saw my picture of mixed white and red roses, he wasn’t angry, just disappointed.  He called the florist back.

Here is where she turned a simple, honest mistake into a customer service failure.

“Do you have proof?” she asked him defensively.  He sent her the picture. Then she went silent. She never said she was sorry, never offered any explanation, and never made any attempt to make it right.

I try to see the florist’s point of view.  She probably thinks I’m some crazy, demanding wife and that I’m being unreasonable.   The flowers were lovely after all, and under most circumstances all parties involved would’ve been more than satisfied.

But an argument between two married people on Valentine’s Day is not a normal circumstance.  The white roses were a white flag of surrender and forgiveness to me, the red and white meant, “I care enough to almost do what you wanted.”

She lost a customer, not by making the mistake in the first place, that’s understandable, but for not accepting responsibility or showing she cares about her customers, whether they have easy online orders or more particular requests.

At times, I get feedback from clients or employees that is not exactly gushing with praise, and it can be hard to take.  As people, we tend to tie our self-worth with outside perceptions. A criticism can feel like a challenge to our ego so our first human response is often defensiveness.

Working for nearly 9 years in customer service oriented health care has taught me that while sometimes the criticism isn’t fair or warranted, sometimes it is. Caring is a given, listening and taking responsibility helps us to grow and improve.

My staff has heard me say in every new employee orientation that “a complaint is a second chance to make it right.”  An unhappy customer who doesn’t take the time to complain, or doesn’t feel that complaint is acknowledged, may simply walk away, chose another provider, or worse yet, write a terrible online review.

Good people make mistakes, and good people understand and forgive mistakes if they are dealt with appropriately.

Today, I have a new bouquet of flowers on my desk, a gift from my husband for Mother’s Day.   The roses are ruby red, tied up with a fancy bow and they make me smile, especially because I didn’t expect them.

Oh, and yes, he bought them from a different florist.